I was asked to make a list of the things I’m most curious about. Thing I’ve had on my must-try-before-I-die list.

Chastity- Maymay wrote about his extended chastity here. Obviously my daydreams aren’t nearly as close as what the reality would probably be. I imagine being locked up and taken out whenever she (whoever she is) wants me. More of an anti-masturbation device than a no-orgasm device. Who knows, maybe she’ll want me locked up for longer durations, or maybe not locked up at all.

CBT- I have limited experience in this area but the hints of it that I’ve experienced have been eye opening. Probably because there are a million wonderfully evil things a woman can do in this area. As with all kinds of pain, it’s limited to those who really get off on giving pain. I hate the idea of feeling pain anywhere but I love the idea of taking the pain for someone who gets off on giving it. Everything from sounds, bondage, clamps, clothespins, you name it and I’m curious about it. The mental image of sounds is enough to make me whimper.

Predicament Bondage- I was talking to someone the other night who mentioned how much she loved doing it to her boyfriend. I hadn’t thought much about it until I saw how much she loved it. Her face lit up with this genuine evil smile. It’s motivated me enough to read more about it and keep my eyes open for someone with an evil smile.

Electrical play- Nuff said. This is a big question mark for me. I’ve heard it can be either very painful or very pleasurable.

Owned- I know now that my previous goal (I wrote about it here) of having a weekend where I was totally owned and controlled by someone is totally unrealistic. Finding someone who wants to own me for a few hours might be more attainable.

I had an interesting yet frustrating conversation with someone who questioned why I call myself submissive and not a slave.

Dominant guy: God… you should use the slave title. You are obviously looking for a service oriented position to where the Dominant in return gives you structure and stability. The only worry that you SHOULD have is serving your Master.

Me: Most Dommes seem to want a submissive in the bedroom but a vanilla guy outside of it.

Dominant guy: Stay away from the submissive title. It scares Masters like me away. Haha

Thankfully I’m not interested in a dominant guy so it really doesn’t matter if it scares away masters (lowercase on purpose) like him. It’s funny how that works though, dominant guys seem to be more interested in D/s than dominant women. I’ve been to a number of D/s oriented events, the last one I went to had maybe 50 gay couples, 50 Dominant male/submissive female couples, a few lesbian couples and two dominant women/male submissive couples.

Many dominant women have expressed to me their desires for a “submissive sometimes in the bedroom but my equal outside of it”. That’s the reason I shy away from calling myself a slave. It scares women off. Not only that, since I’ve pretty much given up on finding anything other than casual play, more and more women seem comfortable with someone who just submits to them in the bedroom. I’m all for that. Sure there’s a part of me that craves D/s, but the part of me that is dying to try out new things in the realm of BDSM overrides the part of me that needs D/s.

I’d rather be a submissive with a chance of getting fucked and toyed with than a slave who’s got no chance in hell.

I’m even cautious about mentioning my interests in D/s when someone asks me what I’m into since that’s enough to scare some off. I should maybe only qualify it by saying “look, someday, if I met someone who wanted to own me outside the bedroom, then great. But right now I’m only looking for casual play”.

Here’s another example from someone after she discovered D/s was something I enjoy:

“Yikes, are you someone that lives the lifestyle 24/7? Im not really down with that. I love sex with down right perversion, but Im not looking to own anyone…thats too heavy for me.”

It took me a while to convince her that I was perfectly happy just having sex with perversion but my interests in D/s may have cost me a one night stand with someone who enjoys things I’m dying to try.

I stumbled upon this while browsing some blogs and found it on a blog by Mistress Medusa. 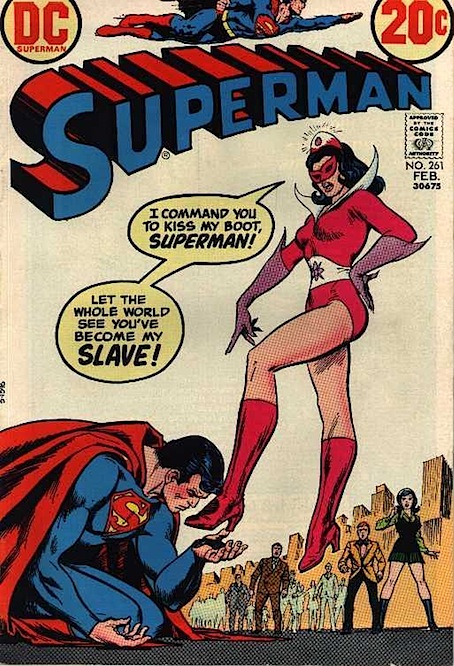 Why oh why did I read X-Men as a kid and not Superman? Clearly I was missing out.

***note*** I’m drunk as I write this. Damn oral fixation never stops and drinkinga beer is sometimes the only way to keep my mouth busy.

I am one lucky SOB

I have spent countless nights trying to accept the fact that I will probably die alone and wondering if I would be better off calling one of those phone numbers I’ve been given by vanilla women while at a part or hanging out at a bar.

The one thing I can take to the grave is how incredibly lucky I am when it comes to my friendships. I have never been lucky in love (sex maybe but not love), but friendships have been my rock, the base, the foundation that I always know I can depend on.

There is a similarity between serving someone I feel submissive to and service for someone I adore as a friend, tonight I practically begged two newly-found friends to let me upgrade their computer. It’s a way for me to show my appretiation for how much I adore them and want to please them.

Most of my friends are women, a majority are whom I’ve met either through casual dating or casual play. One of my best friends recently asked “Am I your only friend you haven’t fucked?”. I don’t play with any of them now (why is it hard for so many people to play and be friends?) but our friendships take care of other needs.

They know I love them. I was walking down the street the other day with a vanilla friend who happens to know about my “Unspeakable acts” as she once called it (hence the name) and we would laughing our asses off about something. Afterwards we hugged, said our I-love-yous and went on separate subway lines. Ever time something like that happens I feel so full of love and happiness that I occasionally get misty eyed.

I’ve recently met even more people I have a feeling will grow into long term friendships. I’m insanely lucky in friendships.

Sure being a submissive male can be trying at times. Sure it might be another year until I get another really good beating (crap the last one I got was around a year ago). But imagine if I was still living back home in the mid-west. Not being able to tell others about myself, not being able to meet so many amazing people. Fuck I love this city. Geez I’m really buzzed from too many beers right now.

Maybe this is it. Maybe serving my friends is the only long term relationship I’m going to have. Maybe my collar will be one of friendship and nothing more. That’s not so bad.

I’m starting on a list of my New Years goals/resolutions.

The first on my list? Stop blogging while drunk.

While talking to a fellow sub recently, she posed a thought that I had never crossed my mind.

What if I have some false ideas about what a D/s relationship would be like. What if I wouldn’t enjoy it? What if I am meant to only enjoy casual play and anything longer than a few hours would be too much for me?

Then she brought up another idea….a hair-brained scheme of sorts. One of those “It’s so crazy, it just might work” ideas.

The idea? A full weekend of slavery.

“What if you could spend a whole weekend as an owned submissive? Sure it wouldn’t be anything like a real relationship, but at least you’d have a better feel for what it would be like, you’d at least get a taste so you could find out if you’re on the right path or not.”

I had never questioned if I was on the right path or not, it just felt right. But she did have a point, one that I couldn’t imagine being true, but she still had a point.

A full weekend of knowing what it was like to be under someone’s total control. Of course it wouldn’t be two straight days of play, it would probably be more like a relationship. There may be some play but there would be a lot of down time, perhaps I could do chores/service. Who knows what it would be like.

“You could go to a pro for a weekend” she said.

“Yeah great, I’ll just save every penny for 3 years and let you know how that turns out”.

A few things have come to mind when I contemplate doing this.

-I would have to be willing to travel anywhere in the country to find someone up for this.

-It would have to be someone I totally trusted, spend even more time getting to know them than I would for casual play.

-It would have to be someone who was prepared for my emotional reaction when the weekend came to an end. I have a feeling I would get very emotional after finally having a taste, a very small hint of what I’m looking for and then having that come to an end.

-It would have to be someone who wanted to experience it as much as I did.

As we were leaving the diner, she handed me 50 cent’s.

“You might as well start saving for the pro-domme weekend now”.