I just walked in the door from TESFest.

-I learned I can’t go to a CBT class for a number of reasons. I have no desire to see another guys junk, I’m a bit uncomfortable seeing others in pain and part of me starts to feel a bit jealous.

–Tilda seems to get cooler every time I see her. Any woman who owns leather converse is a rock star in my book. I tend to “borrow” her confidence whenever I’m around her.

-My best friend bought her first bit of hemp rope from Jocasta. She found two boys to practice on and was beaming after every time she played. Her favorite class was presented by Boymeat and is now planning on getting into electro play.

-One woman (whom I’m always feeling shy around for some reason) suggested I buy a cock ring. I never would have done it but when an attractive woman suggests it and even takes you to the vending area to buy it, one can hardly resist. I was a bit embarrassed when she was talking to the venders about it but was also trying to cover up my obvious arousal.

-I managed to walk by another one of my good friends as she was beating some guy up in the dungeon. It looked so intense I was surprised everyone else didn’t just stop and watch. Normally I’m busy trying to make her laugh, now I’m starting to think I need to get her angry.

–Lolita may have sensed my desperation because she went out of her way to talk me up to one very attractive woman. For a second I thought she may have actually been interested until I realized she had her submissive with her already. Still, it was nice feeling while it lasted. Lolita is the only person I know who could have pulled off being my “wingman” while wearing Mickey Mouse ears. Note to self: Find out how Lolita got her superpowers.

–Calico pinched my butt as I walked by one morning! I thanked her for it of course and was tempted to keep walking by her every time I saw her.

-Rita Seagrave is awesome-tastic. I’ve never been to a presentation like hers before. Can we get an All-Rita cable channel?

–Viviane suggested I take a class on seduction. I’ve never had bad advice from her so I took it. The presenter offered some good advice even though I felt like most of the stuff would work better for me if I were dominant. I did notice a few things I’m doing wrong and perhaps things I need to cover up about my personality. I’ll write more about that later.

-I’ve had a number of emails asking if I used any condoms over the weekend. I have them for sale if anyone wants to buy some unused condoms. They’re out of the box so I’ll offer a discount. I’d return them to the drugstore but I doubt they’d give me a refund, maybe store credit. 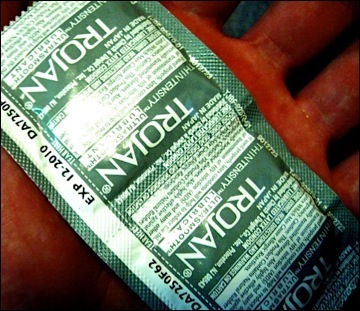 If you haven’t used those condoms by Christmas 2010, I’ll take them off your hands.

Yeah, but you can rock the leather pants with the All Stars which is both hot and cool.

Hey, just because a woman is there with her submissive doesn’t mean she might not be interested. I’m usually with Joscelin but that doesn’t mean I’m not more or less on the make 😉

What is with guys calling penises “junk”?!

I had so great time with you. Yes, I agreed with Tilda. Your leather are ROCK 😛

i think that you are ace for going along and taking part, regardless of outcome.

I have to say it was very interesting seeing you in person, if only briefly.

@maymay – I call penis’s junk too!

Im beginning to think most Dommes are ugly…

Dude! Those condoms are good for another 2 years.

Jefferson- If I haven’t had sex by then, I’ll leave ’em to you in my will.

BondageFreaky- ALWAYS a good time with you!

Almostmagic- It was wayyyyy too brief, hope to see you again soon.

Wish I’d known you were looking. My boy couldn’t make it and I was dying to beat someone. May have seen you but don’t know.

Hey Axe,
I’m sorry we didn’t get a chance to meet up! And please thank your friend for me, I was the demo bottom in the electro class, and she was such a sweet heart and her questions were great!

Hey, condoms can be used on toys, too! Ya know, in case you need to stuff something up your ass or someone elses.

Wendy can tell you all about that.