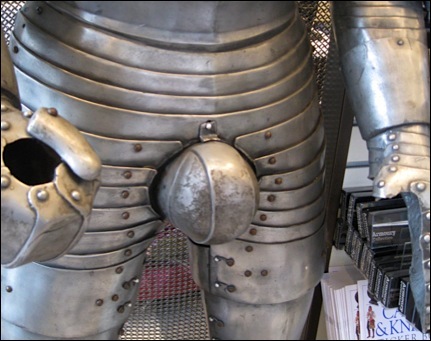 Ultimately, your only choice is to be yourself, the most honest self you can be. If you’re not, if you present yourself as what you think a woman is looking for, she will very quickly realize that it isn’t really you (even if it’s partly you), and will feel deceived, even though that isn’t your intention. What can I say? I think the cliché about not trying so hard is right on the money. You are good enough the way you are. Stick with it.

Actually, I do believe that is to protect your junk while at war. I would NOT want to take a lance to the crotch.

Look, you know this as well as I do. Assertive does not always equal dominant, nor does passive always equal submissive.

People online seem to use shortcuts…if he bows and scrapes that equals submission. No. That means the woman in question is equally using shortcuts and not really being herself.

Being yourself, assertive, strong, forthright and also, yes, submissive is the best tactic in any case. IMHO.

Have fun over there.

That looks very desirable, I might go and play with it in my mind.

Be yourself, be honest, understand how valuable you are. Can’t do any better than that.

um does the possibility that she may just not be all that dominant not exist? I don’t see why this is a reason not to keep being yourself. As for the you need to pay for it I get the opposite from reading your blogs. While some would probably benefit from a pro it seems to me what you need is a relationship. You seem to put a lot of value in what random people say about who you are.

I agree that passive and quiet doesn’t necessarily mean submissive and aggressive and loud doesn’t mean dominant. Personally, I like submissive men who are smart and funny and fight with me a little, but always know who’s boss 😉

It’s already been said, but bears saying again: be yourself and the likelihood that you’ll find someone who is a right fit for you goes way up.

When we interact, we bring all of these other people with us. If I describe myself as a sadist and dominant, you will automatically filter what I say through your experiences with other people called “sadist” and “dominant.” I will also filter you through my experiences with “masochist” and “submissive.” Both of these filters color our interactions.

So how people define terms is entirely subjective, which can be frustrating when you’re trying to self-define. It’s hard to define yourself according to someone else’s subjective reality (obvious, I suppose, but I see people doing it all the time).

And while advice can be helpful, perhaps someone telling you that you put your submissive sexuality out there too much will help you find someone, but will it be the someone you are compatible with?

After all, there is a reason you put it out there… it is important to you.

Have you ever tried to top a submissive woman, You might discover something new about yourself. Hell you might be a “switch”
LOL

Good luck. Also, fleshlight is better than jerking off alone, I’ve been informed. 🙂