Bulldog Gin has a new ad campaign. I would have totally missed it if it had not been for someone I drool over pointing it out to me.

C’mon, Bitchslap? The movie?? I suggest you check out the website to enjoy it to it’s biggest potential.

She also sent along this shot: 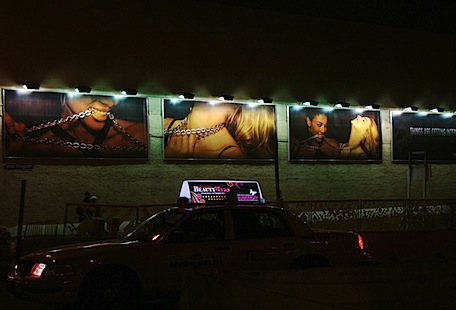 Eileen-
Hot pencil skirt lady is holding hot collar lady’s chain… which strikes me as femdom. I mean, if the ones with the giggly ladies isn’t problematic, that should definitely count! Additionally, there’s the beating/blowing up/shooting of various people by all three hot ladies. (Admittedly, hot hoop earrings lady looks sort of boring. A pencil skirt is impractical in a fight, but I’ll take it because it looks good. Fighting in what looks like gold lame is just kinda dumb.) And also, the trailer promises what appeared to be sweaty fishnet-wearing sex. If that’s wrong, I don’t wanna be right.

wow you had a lot of posts. i’ve been sitting here all night reading your blog, instead of attempting my essay. i’m now finally caught up.
=)

i remember an episode of wife swap where the husband was extremely dedicated to serving his wife. he did all of the chores around the house and when the new wife told him to watch tv as she would vacumm for him, he bursted into tears confessing that he “loves vacumming and cleaning for his wife.” i thought it was hilarious as i was also thinking “i want me one of those.”

i remember this one boy who i can now identify as a submissive. i think i was 12 or something and he had the biggest crush on me. he would offer and insist on doing things for me like fetching me water, putting my homework in the “inbox”, delivering classroom materials to me, he even offered me a massage, etc. at first i took advantage of his willingness but then i thought i was using/abusing/leading him on as i did not have any “romantic” interest in him so i refused his services. i didn’t want to hurt him or use him because i hate feeling used or manipulated, but now that i think of it maybe he liked doing things for me and serving me. i actually think i hurt his feelings when i refused his services. i think genuinely enjoyed serving me without any other intentions. i should have kept him as my “slave” as that is what my friends called him. maybe we would have both been happy…or not. lol. =)

i remember when i was little, my friends and i would play role play games. the other girls always wanted to be the princess/damsel in distress and wanted to be tied up and captured and “tortured?”(i guess there really are a lot of submissive women) while i was always the evil villian capturing, tying them up, making them do things etc. i don’t know what it really means to be a true domme but i don’t hate it. i’ve always known i wanted to be the more “dominate” one in a relationship as i told my mom i that i want a wife not a husband. she snickered back a “good luck!” lol. oh and i just realized-little girls are really kinky.

anyways i really enjoyed your blog. it’s a perspective i’m new too. i hope you find your domme. so what exactly are you looking for? it is still unclear to me. what kind of domme specifically? since everyone has different ideas of their ideal domme/woman.

so the ratio of domme:sub is that much in my favor? wow. lucky me.

my thats a long comment. hope you’re just as much a fan of them as i am.

As far as I’m concerned this more than made up for the Britney Spears video, which I actually didn’t see. The concept disturbed me, but you have appeased me now.