She was fucking me, hard, and I was lost in another world. Sade was making the approving sounds she makes when she’s really getting into it.

At that point all I could mutter was a few “Oh fucks” and “Oh Gods”.

Sade now has me at the point where she can fuck me hard and it doesn’t hurt in the least. Our eyes lock as she pounds me.

I’ve been so close to orgasm that I have no idea how it’s even possible that I can hold out any longer.

I know she’s close to orgasm. She’s stroking me at the same time with my legs up in the air and every muscle tightens as I plead with my eyes because the words won’t come out. Finally she tells me to come when she does and she does.

Just a few days earlier I was on my stomach on the sub girl’s bed. The girl was on top of me grinding into my back while Sade took turns spanking us and encouraging us to grind harder and I could feel her dripping on my back.

Moments later I’m standing and the girl gets on all fours on the bed. Without being told I bury my tongue between her legs as Sade straps on her harness and looks at me with a smile. For a brief second I feel like I’ve been caught and I tell Sade I’m just getting the girl ready for her. Sade smiles approvingly.

The girl has her mouth on my cock while Sade fucks her from behind. Sade tells me to fuck the girl’s mouth and I grab a fist of her hair. Sade looks at me with lust and we kiss over the girl’s back.

I’m fucking Sade as the girl masturbates and touches us. I try to make sure I give the girl a good view of the fuck. Sade has come a few times and I almost need to beg to be allowed to give her just one more and she lets me.

The girl asks “Is it his turn to come yet?” and Sade says “Soon”.

Sade is fucking me while the girl sits on my face and sucks me. I’m overwhelmed. The pleasure center of my brain is conflicted between the cock in my ass, the mouth on my cock and the clit on my tongue.

I scream into the girl’s ass and I can hear Sade moaning with approval.

It didn’t take us long to rip our clothes off.  I was eager to get to the main event but that was nothing compared to her, I was worried I’d need to beg her to fuck first since I knew I’d end up being a puddle on the floor when she was done with me and I desperately wanted to get her off first.

We explored the room with our bodies, we took photos, and I really got down before she pushed me off of her and told me it was time for her to string me up and fuck me.

My legs were pulled apart and lifted toward the ceiling, I was still on the ground but could feel myself slipping deeper and deeper into subspace.  By the time she had me off the ground with my wrists and ankles connected on either end of a spreader bar, I would have agreed to anything I was in so deep.   It was emotional subspace more than physical at this point and that’s usually just as deep for me.   I couldn’t think and I’m lucky to have been able to mumble “Yes Ma’am”.

After she had me up she had me swing back and forth like a pendulum.  An evil smile came across her face and she took about a dozen photos before coming back to me.

In retrospect it was a good thing I was in such deep subspace, not only because it turned her on even more to see me like that but the suspension cuffs we were using were digging into my wrists pretty strongly but I didn’t want to stop.    She ordered me to tell her if the pain in my wrists became too much to bear.  She knew if I had my way I’d put up with it longer than I should (I had hurt myself before).

She toyed around with me for a little while, spanking me, using my cock as a handle to move me forward and back before checking my wrists and seeing we had limited time.

Eventually, satiated, she slowly lowered me to the floor, kissing me with a big satisfied smile on her face.   On the subway ride home I don’t know that I said anything more than “Oh fuck…..oh fuck”.

Later she’d show some of the photos to a few friends and the feeling of being objectified would wash over me again.   I still shiver and ache at the thought of it now.

We’ve looked at a few suspension rigs and agree it would be a perfect addition to our apartment but it will take some time to make that happen.

Thankfully, my birthday is just a few months away and I know exactly what I’m going to request as the only thing I want.

Boy Butter: For Your Pooper, It’s the Shit

We’ve tried so many kinds of lube it’s impossible for me to list them all.  The best we could find was either too messy or silicone based.

Then we tried Boy Butter and we haven’t looked back since.   It’s long lasting and don’t let the name fool ya, it’s good for girls too!

I was sure that I had posted this a while ago but I couldn’t find it so here it is.   Found on a pair of jeans, it makes you wonder if they really knew what that means. 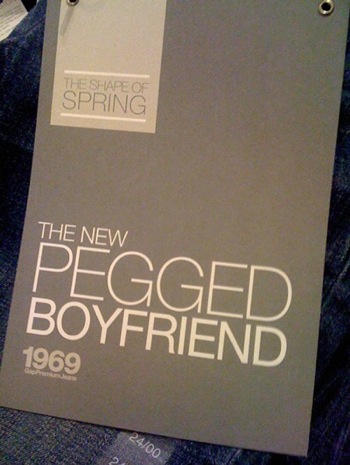