I stapled my underwear shut

So Sade and I participated in the 11th annual no pants subway ride today.

Well I normally wear boxer briefs but figured they’d be too revealing (sorry ladies of NYC) so I opted for boxers.

The biggest problem with boxers is the cock-flap that opens up in the front.  Its far too easy for something to flop out and if I was going to be on the subway with Sade while she was standing around in her underwear, I knew I’d have a hard time not getting hard as it was.  So I ended up stapling the front flap shut just to be safe.

The whole point of the NPSR is to freak people out by showing up without pants on. You ride for a few stops, get off your train and jump on the very next one.   That way someone who’s not in on it will be watching

I was hoping to see some shocked reactions when we hopped onto our second train but as soon as we walked on it was clear that everyone was in on the joke.  The only person wearing pants in our subway car was a woman who wouldn’t stop giggling while snapping photos of everyone.

We switched trains and jumped on to a train headed downtown.  The station was filled with pants less new Yorkers and it was a bit hard to navigate.  Sade reached down between my legs, grabbed my cock over my boxers and  began to lead me through the sea of people.   She only did it a few times but it felt like much longer.   I immediately regretted not wearing my long coat.  Thankfully there were plenty of big, half naked, hairy guys standing around in their underwear and that acted as a instant erection-killer. 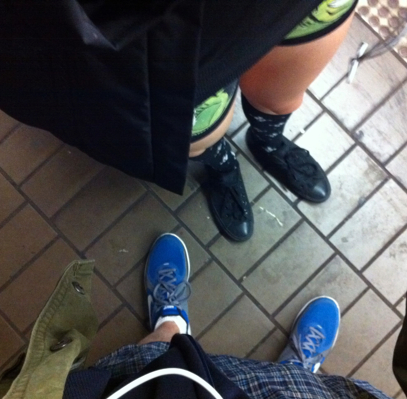