Human furniture is a very popular theme in fashion photography. (Sade said that when I showed her these images, made me sound smart right?). 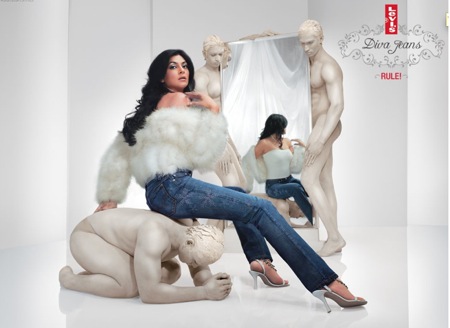 Walking home the other night I spotted a new ad campaign for Skyy Vodka.  They even go as far to print “Kinky was here”.

A reader sent me this one.

So the point of this advertisement is that she’s a strong woman, so strong that she can handle the fact that her man let a dog hump his leg so long that it rubbed the fabric of his pants down to nothing and she’s going to sew it up (I assume to encourage the behavior again) and do it over her knee.