Over the past two days I’ve had emails and tweets from friends informing me of this.

The gorilla outfit kinda creeps me out though. I need to stare at the legs to keep my mind from thinking he’s being molested by Robin WIlliams. 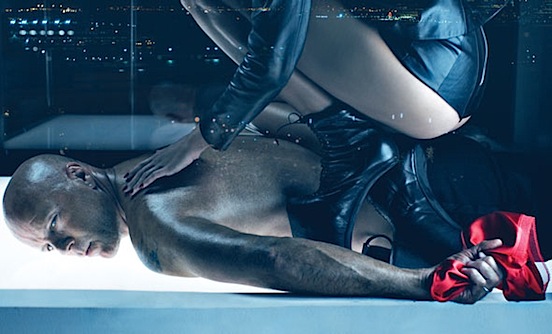 He’s got a really big forehead though. So there’s that.

I’m intrigued by the story being told by these pictures. Compared to Bruce, Emma looks vaguely alien, insect-like. The last shot is particularly evocative, (though I think she has more to worry about in those shoes than he).

Ugh. Normally I really like Bruce Willis, but that woman is ruining it for me. Anorexic broads with vacant eyes wearing hideous shoes? No thanks.

mmm for Bruce Willis. There is something very satisfying in the idea of topping an action-super-hero. Makes you feel doubly powerful. Not entirely sure I’d be able to do it whilst wearing a rug and some sort of torture-platforms though…

Mind you, I’d also like to be captured and beaten up by Bruce Willis, so I’m clearly equal opportunities on this one.

I don’t understand the first picture so much. (Why wear a fur suit while topping in a kitchen? Is Bruce Willis really afraid of finding hair in his food?)

I really like the last shot though. Some of my fondest play memories involve leading blindfolded men through the streets…

Also, I think Emma looks great. Is she thin and looking like someone who eats less burgers than I do? Sure. Anorexic, not so much.

Holy crap, let me amend that statement. The dead “dominant” woman in the slave boots *is* wearing a collar! Looks like it’s made of heavy, thick links of chain.

Her Nina Ricci boots look a lot like some of the pony boots sold at fetish events. Sure he’s lucky: he’s a middle-aged guy who’s been blessed with some fabulous eye candy!

I think he’s being dominated, not sure by her though. I realize that makes no sense, but to me, because her face isn’t in the first two, I don’t get the interaction as much. The last one is definitely hot and I get her leading him–the third, yugh, I wish she weren’t so . . . insecty and furry and space alien.

Strange, yet interesting. Maybe it’s that he’s an actor and she’s a model? He looks so much more compelling than she does, dunno why.

It is possible I have taken one too many psychology classes and have way too much time on my hands but my thoughts are that she represents him, the him within and he is struggling with himself – she is the representation of the “beast within” hence the ape (think evolution kids) costume.
In the first photo, it is only his feet that are strapped down, and his hands are free, free to struggle something he wouldn’t be able to do if she was truly dominating him.
In the second photo, he’s grasping red panties, and one has to wonder why? Psychologically speaking the color red has a connotation of masculinity, strength, passion, aggression – among others – but if I had to put meaning to Bruce grasping red pantie it would be that he is trying to hold onto his masculinity which could be translated into his dominance over “the beast”.
In my opinion, the third and fourth photo should be juxtaposed, as the fourth photo indicates that he is being led downward, and down equates bad (think of Hell, downward spiral etc) but as a victim since he is blindfolded and his “flesh” colored shorts make him appear a) without genitals and/or b) nude. Perhaps the meaning is if he continues with her he will be emasculated? And the skeleton painting on the wall could indicate a loss of self? Loss of identity?
I would interpret the third photo, in which he is now wearing black shorts – hmmmm, why the change in his shorts unless to make him less of a victim? – while she is lying seemingly dead, as he has killed her and he has her blood on his hands, hence the red gloves.
I would interpret his curling up in a corner as self-growth, a moment of “what have I done” that all of us experience after a monumental change in our lives. I don’t think the chain that now appears on her neck is about submissive, it is about victory, she [the beast] is now under control [chained].

oh my. yeah, the gorilla outfit is really bizarre. i LOVE the last one for some reason. i’ve fantasized about doing the same to someone myself. read: leading them blindfolded downstairs in their underwear. seems like a very specific fantasy, but there you go.