The spreader bar held my ankles, my wrists were attached to the center of the bar and I was slowly pulled up off the floor and into the air.

hmmm hard to describe actually.   Here, I found an image that seems to resemble the position at least somewhat: 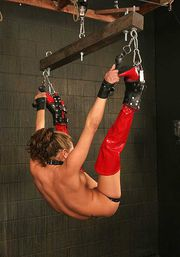 I had mentiond my desire to be put in this position once long ago but was told I was probably too tall for it to be comfortable, I was also told that most men weren’t flexible enough to pull it off.   Finally though I was in a situation where I could try it.

I was nervous at first but eventually that feeling faded away.   Sade spun me around a few times and it hit me how this was probably the most helpless position possible.   In most forms of bondage I can at least squirm or shake but not in this one, there was nothing for me to squirm or move against.

It all happened so fast and I was so completley lost in her that I barely remember the details.   I remember the rope around my balls.  I remember the only pain I could feel was the pain in my thumbs.  Maybe the wrist cuffs were designed for smaller hands, most of my weight was pressing against the backs of my thumbs but even that pain wasn’t nearly enough for me to want to stop.

I remember her hands scratching my ass and the backs of my thighs.  She slid into me.  First she used the rope around my balls to pull me back and forth onto her but eventually she just grabbed all of me.  At one point she did what I had wanted to do for so long but coulnd’t because of my position and she kissed me with the same passion I was feeling for her.

I didn’t want it to end but eventually it did. We weren’t playing in our usual dynamic due to others around us and the pain in my thumbs was becoming too much.

I’ve been looking for some good suspsnsion wrist cuffs.  If only there was a way to get a decent suspension unit in our apartment.

Your mistress is very lucky. I’m sure I’m not the only one of your readers who would have paid good money to watch you in such a predicament. Even more to find you alone in such a position.

I found something on Etsy of all places. It was the center of the tripod and I just got pipe legs for it at home depot. And it can then be disassembled when not in use.