My Iphone Is Now A Sex Tool

I’ve been using a number of social networking apps for the Iphone that display other users in the area based on GPS data. It’s pretty cool. I have a couple of friends who are using them as well. It’s kinda neat in a big-brother kinda way.

I loaded up one app called Nrme and checked out who was in my area. Here’s what I saw: 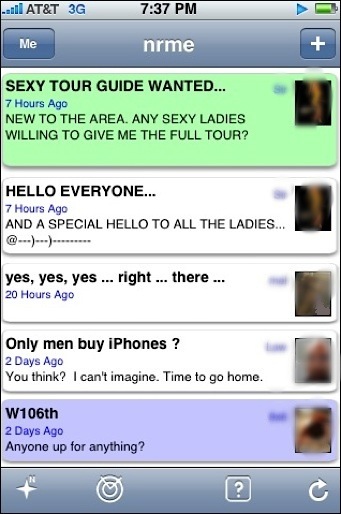 They could have called this app “sausage fest”.

Granted, I didn’t start using the thing in order to meet women but it’s nice to know that it wouldn’t be out of the question.

I loaded another app and searched for area users and one of the closest people to my location was some guy who had a photo of his privates displayed on his profile.