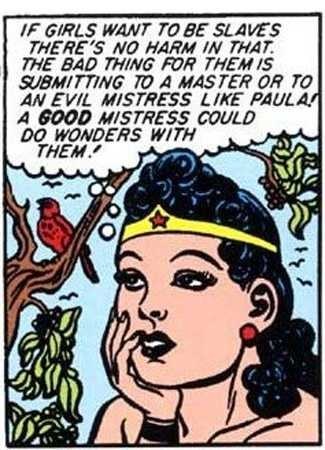 I know this one! If you’re genuinely curious, keep reading.

The context is… actual (non-sexual) slavery. It’s from Wonder Woman #3 (1943), and is about an island where Paula von Gunther, Nazi scientist, has a bunch of women enslaved. Wondie rescues them… and they then are taken to Themyscira, island of the amazons and given the chance to serve an amazon mistress.

Well, it was not explicitly sexual in the comic, but read up on William Moulton Marston (WW’s creator), consider the fact that he kinked on female supremacy and the fact that Nazis were a popular dirty magazine kink subject as soon as the end of the war, and draw your own conclusions.